Review of a new Japanese-French Restaurant

Written by Eva Christiansen
For Expats.cz

The first thing you notice when you step into Le Club Restaurant French and Japanese Cuisine is that the interior is minimal and unique. Details, like the blue glass ashtrays are selected personally by the owner, or in the case of the matching blue glass lighting fixtures, designed by him personally. The bi-cultural menu features dishes from French and Japanese kitchens and everything from the appearance of the space to the variety of foods on the plates make you aware of one small fact: you´re experiencing something unique in Prague. If variety is what keeps you stepping out to new places, do check out Le Club and consider making it one of your regular haunts – the food is quite aparte and the menu rotates monthly.

The owner, Sahib, also owns the successful Cheers bar and restaurant on Namesti Miru. The two spaces are around the corner from each other, so for a nice evening you can take guests to a dinner at Le Club followed by drinks at Cheers. We had the privilege of watching the crew at work in the kitchen, bustling back and forth, garnishing plates loaded with good looking food. The head chef happens to also be the other owner of the restaurant, something you don´t see that often but makes a lot of sense: if the overseer in the kitchen is invested in the personal satisfaction of each guest, you don´t get sloppy meals from the “I just work here”- type cooks.

Head chef Miya Zaki Toshi Haru is from Japan and was in the personal service of the Ambassador to Japan for years. Joining forces with Sahib, he now operates in a kitchen designed to his exact specifications and has complete control of over his menu and all ingredients. Seeing him work is like watching someone in a Zen-like trance: the man is completely in the zone as he transforms raw ingredients into his various specialties, it seems repetition has not rendered the process mindless, au contraire.

The largely Japanese clientele flock here for his tasty inventions. While dishes like Sushi and Tempura and even Udon are viewed as unusual, expensive and therefore classy, the truth is that in Japan these foods are considered fast food. These are things you gobble down at the local deli when you just need to fill your stomach with any old thing. True Japanese gourmet is something most of us have not encountered, so Le Club is a godsend for relocated and visiting Japanese who want a formidable dining experience. 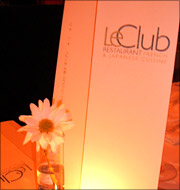 I was curious about items I´d never heard of, gunard (a fish) and Shabu-shabu (a pork and sesame salad) but was steered by the chef´s recommendations to instead order the Tuna Tartar and Rack of Lamb for my dinner partner; and Tiger Prawns, Hot Soba and “Le Club Burger: for myself. The starters were both very nice; my prawns were served on a Provencal sauce that didn´t taste like your generic Provencal spice mix and the tartar was perfect: avocado, wasabi and peanuts and the only thing that could have improved on it for this spoiled ex-Californian would be if the avocados were creamy and ripe, but since that is practically an endangered species in this part of the world, I´ll accept this creative little combo as it comes.

The soup was de-licious. I think next time I´ll be bold and try the cold soba, though the idea of cold soup is strange and I imagine the tempura vegetables must lose their crunch. With the hot soup you get moist little morsels of duck cooked just right, with leeks in the broth alongside perfect soba noodles. The flavor was rich and not dominated by salt. This should go without saying – but too many local restaurants serve soups with either no flavor to speak of some flavor that is completely eclipsed by salt.

Both main dishes were a hit with us: the lamb was succulent, well-spiced and served with a zingy mustard sauce and rice croquettes – a perfect fusion of Japanese and French kitchens on one plate. My first impression when studying the menu was that it leaned heavily towards the Japanese while the French kitchen was under-represented, but once the food arrived I could see where the influence of the French enters into the equation.

My “Le Club Burger” was really quite something else. For a start, the bun is a homemade creation made of rice, so you can forget about picking up your burger between two golden, fluffy pieces of a bun and having a good chomp. It´s a more elegant burger than that. Well, it isn´t really a burger in the traditional sense at all. If you enjoy the “burger” at Mozaika and are open to interpretation, you will be pleased enough. The beef is sliced thin and marinated in teriyaki. Delicious! The rice bun is dense and somewhat gelatinous but not in a bad way, just – different. Our lamb and burger were the priciest items on the menu at 395 and 315 respectively, which is really not that bad. On the recommendation of our waiter we got a bottle of Chateau Gigognan and it was heavenly, once it took its sweet time aerating.

As for dessert: they were fresh and light, so you should not avoid them just because you´ve had a filling meal and fear a case of the post-dinner “heavies”. My green tea mousse had a very light flavor almost untastably so, but with a fun, spongy texture – both the “mousse” and the squishy green crepe it came wrapped up in. It´s a pleasure tasting green tea the way it´s supposed to taste – meaning, not oversteeped and bitter. True green tea taste is light and flowery and works very well in desserts. In fact, I hope they introduce green tea ice cream on some future menu – that´s divine. My dining buddy had a rhubarb creme brulee that was quite mild and in my opinion could have had lots more rhubarb in it, but I guess with a peculiar flavor like that they prefer to err on the side of not too tart. In which case, it could have used more caramel taste. But let that be proof to my statement that the desserts are light so go ahead and order some, you won´t be overwhelmed.

The philosophy behind the service you receive was explained to me as “each guest is king of their table country.” So your waiter doesn´t impose his idea of how the table should be or shuffle around obtrusively placing down clean ashtray or removing plates or doing anything without asking you first. It´s a pet peeve of Sahib that in so many places you take your seat and are then in the domain of your waiter and at his mercy as he goes about his business, often times not even making eye contact. The overall vibe isn´t stuffy, and though it´s a restaurant that takes food seriously, you could walk in with a group of pals, canoodle with your date, and wear jeans and not feel odd. Business lunchers love the room in the back, with a table for six and nothing else in the room but your guests, a bar and the window out onto the street. It´s a place to focus on food, not feel fussed over and enjoy your table, or “country”, for a while.

Find out more about Le Club in their expats.cz business directory listing : https://www.expats.cz/prague/czech/japanese-restaurants/le-club-prague/